Try to solve the lab exercises yourself before you view the solutions!
You can find the exercises to Lab Session 02 here.

Disagree with my solutions to the exercises, or have something to add?
Leave a comment!

a) Here’s a different example. Take a look at the regex cheat sheet to figure out what each of the characters in the expression mean.

Searching for words which begin with ‘trav’

b) This regular expression searches for all four-digit numbers in the file. There are multiple different expressions which accomplish the same thing. See if you can find them!

There a many ways to search for digits, and some variants are only implemented in certain programs/languages/shells. Here are a few examples:

Look at the examples in the lecture notes for Tokenization with egrep.
a) As an exercise, change the regexp to make a list of words with two letters or fewer.

The following shell script will extract all words with two characters or less (1 or 2 characters) from a given input file. This includes numbers.

If you don’t want to retrieve numbers, you can use egrep with this expression instead:

b) What do you gain and what do you lose by case folding?
Case folding can be used to identify unique words regardless of whether the words are at the beginning of a new sentence or not. Since lower and upper case characters are encoded differently, we will have to use case folding before creating a frequency list or tokenization of a file.

However, case folding can sometimes make it harder to distinguish between common nouns and proper nouns, such as the name of a person, a place, or a thing. Since a lot of names are based on existing words/concepts, many words mean different things depending on whether they are capitalized or not. For example, Bash is a shell environment, while (to) bash is a verb.

c) What is a word? Should we exclude numbers? What about compounds with hyphens?
In general, I guess we can say that while words can be used to express numbers, the words are not the numbers themselves, and the numbers are certainly not words. So while “one” is a word, “1” is a numeral (digit).

Whether we should exclude numbers depends on what our current aim is. It is common to exclude numericals (1), while keeping words that express numbers (one).

The same goes for compounds with hyphens. Technically, they are not a single word. However, they are often used as single word, and sometimes a compund with a hyphen has a very specific meaning that cannot be captured without the hyphen. We should therefore think twice i.e. before removing or keeping hyphens when we are creating a frequency list or tokenizing a file.

a) Create a second script which takes a regular expression from the user and filters the records.
There are many ways to do this, and that’s kind of the point. Play around with different scripts by prompting the user for an input, and then doing something simple with it. Here’s my suggestion: 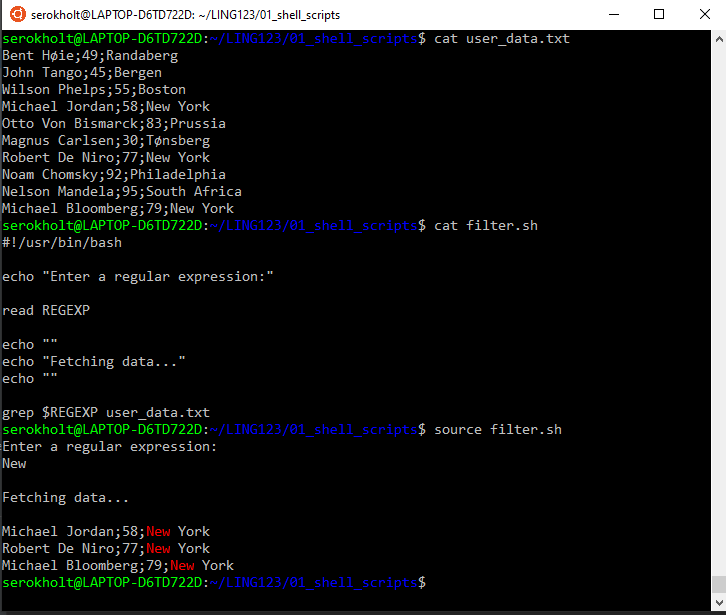 a) Try the last example in the lecture notes section about character translation, but read input from a file instead of the terminal by means of < chess.txt.

b) Write a script that replaces all vowels with asterisks.

Output from running the script on the command line:

We can grep only the lines in the output from the tr command which contain text by adding | egrep -v '^$' like this:

d) When tokenizing, you can also select other strings than whole words. Find all consonant clusters by using the regular expression [bcdfghjklmnpqrstvwxzBCDFGHJKLMNPQRSTVWXZ] instead.